I grew up as a 90s kid. It’s the one decade I remember from beginning to end. Part of the 80s was fuzzy for me. But the 90s.. I remember. Like it was yesterday. In the 90s there was something for everybody. There were even a variety of flavors to enjoy in one hit wonders. It wasn’t just one particular style like there is now. There was however a particular sound of the 90s. It did exist.. crunchy guitars, self deprecating lyrics, and let’s not forget the heavy use of sampling. These features were also recognizable in soundtracks. In movies, the soundtrack tells a story and in the 90s this was no different. Sometimes, the soundtracks were much better than the ACTUAL movie. Back then, I was obsessed with soundtracks. I wish movie studios and record labels would put money and thought into soundtracks now as much as they did in the 90s. Here are a few of my favorites, in no particular order. They’re just ones I really loved.

1. Pump Up the Volume – I admit I was obsessed with Christian Slater and his Jack Nicholson voice. And his incredibly arched eyebrows. In this movie, he was a shy teenager who became popular as an anonymous underground pirate radio DJ named Hard Harry. Oh the feels I had for Hard Harry. But that’s for another blog. The soundtrack was a culmination of alternative, rap, and pop songs. From Cowboy Junkies, Above the Law, Leonard Cohen, Henry Rollins, and many others, each song spoke to the average teenager who were filled with angst, loneliness, frustration, and lust. Still a go to favorite on my pod. 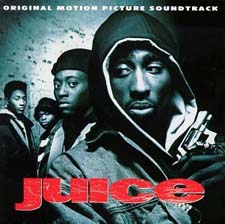 2. Juice – Oh yes, one of the many many movies featuring Black teens on the road to ruin because of their situations except for one lone teen who wanted to make something better of their life. Too many movies with this storyline, even today. The term, Juice, refers to having respect in your environment. Although to this day, I hear that word and I want a cup of orange juice. Anyhooters, this starred Tupac Shakur as the antagonist (shocker) trying to lure his friends into a life of crime and Omar Epps (the one good kid) who was an aspiring DJ ready to grow up and leave the bad scene behind. The soundtrack was made up of Aaron Hall, Eric B. & Rakim, E.P.M.D., Cypress Hill, among others. The amount of hip hop talent on this soundtrack was incredible. And Aaron Hall’s “Don’t Be Afraid” is still a freaky jam. It’s a cult favorite movie, and the soundtrack was a great companion. 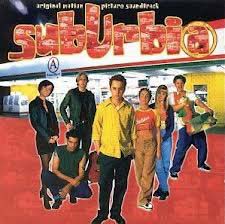 3. Suburbia – Oh another movie about teenaged angst and searching for themselves and wondering what life has to offer. They want to break out of their surroundings. Only their way of breaking out is – hanging out by a garbage bin by the neighborhood 7-11.  Frankly this movie sucked poopie chicken. But the soundtrack was very well done, with a collection of contributions by Superchunk, Thursten Moore, U.N.K.L.E., Beck, Butthole Surfers, and a myriad of others.  These artists pretty much nail the frustration of young people and their hopes of NOT ending up like their parents. 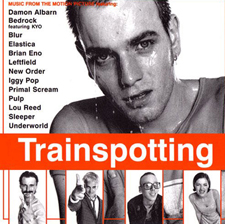 4. Trainspotting and Trainspotting II – These soundtracks are just perfect. Just. Perfect. The movie? Who cares! The soundtracks have Iggy Pop and Goldie and Heaven 17! How can you go wrong?? The movie is about a set of Brits who are friends and they’re also drug addicts trying to fumble through life. It was the feel good movie back in the day from Danny Boyle. It’s a good movie but the soundtracks which are comprised mostly of dance and electronica artists (before electronica was cool) are the real winners here. Oh the 90s…

5. Boomerang Soundtrack – This is a perfect example of a soundtrack being better than the movie. Eddie Murphy plays a womanizer, fighting off Eartha Kit, Grace Jones, Tisha Campbell, while falling for his true love played by Halle Berry. The soundtrack was stellar from LaFace Records. It brought us Toni Braxton, an off beat hit from P.M. Dawn (“I’d Die Without You”), and one of the biggest singles in pop history: “End of the Road” by Boyz II Men. It’s a beautifully crafted album from beginning to end and possibly the beginning of the end for good r&B soundtracks.

6. Empire Records – The movie is now a cult favorite. A take off of working at Tower Records, there are a group of misfits, each with their own problems, who are trying to figure out a way to save their store from being taken over by a “Record Town.” In between this caper, there’s a funeral, a has-been in store signing, and an offbeat soundtrack led by the Gin Blossoms’ “Til I Hear it From You.” I know. I know. You’re singing it to yourself right now. So am I.

7. The Bodyguard Soundtrack – I think everyone and their mother knows of this bad boy. So I won’t say too much about it. The true beauty of this album wasn’t Whitney’s cover of “I Will Always Love You.” It was “Queen of the Night.” Seriously, listen to that and turn it up LOUD!

8.  The X-Files Soundtrack. The truth. Is out there.  Foo Fighters, Better than Ezra, X, Ween, Filter, among others. It’s the most alternative dark alternative album I’ve EVER listened to and I loved every minute of it. You might not get the movie, but the music more than makes up for it.

9.The Mortal Kombat Soundtrack. No, this isn’t about video game sound effects. But when I think about industrial electronica and rock music at its finest, this does pop into my head as a good introduction to the genre. And Control by Traci Lords is pretty classic if you ask me. Yes, that Traci Lords. You are correct Alex.

10. AAAND bringing up the rear.. Go. This soundtrack is a perfect partner for a movie full of debauchery, drugs, raves, and money. All the stories in this movie connect to each other in some way. It’s the last of the decade, coming out in 1999. The movie focuses around a drug deal gone wrong at a rave (because we’ve all experienced that right?). The soundtrack has No Doubt, Fatboy Slim, Len (come on, you love Steal My Sunshine), Eagle Eye Cherry, among others. It’s full of pop, dance, and a little electonica. I love it. It’s fun. A fun soundtrack. Imagine that. A great soundtrack.

You know what to do folks:

Plug in, rock out, and enjoy.

Wasted With A Smile – Kraak & Smaak

Happy Ever After – Gin Wigmore

Give Me Hope – New Politics